Proem puts on this huge event every December and first weekend of January (around Three King’s Day) where thousands of people come to watch an outdoor walk-through play about the birth of Christ. I mean, they really do it up. It was such an awesome experience to be a part of and go see. Roman centurions in full armor, real livestock, a replicated ancient village of Bethlehem complete with hagglers and craftsmen, and you even have a part where the soldiers leading you through will demand to see your papers before allowing you to enter the town.

I was so busy during the whole event, I didn’t get a chance to take many photos, but they have a Facebook page here where you can see what happened and see past editions of Journey: Podróż do Betlejem

Before the groups get to come through, they can stay warm and sit in the magazine to enjoy videos related to the story of Christmas, and live singing and dancing performances. This is what I was doing all December and this past weekend. And I had a blast. The green room was always lively, between having a bunch of performers’ children playing, some of the performers themselves playing (we had a kid chorus too), and the number of acts fluctuating. This past weekend we had the most: a full gospel choir from Katowice called Z Miłości, a band called CCZ, and a selected group of kids from Tomy School where I work re-performed some of their Wigilia pieces.

My role this time was to sing 3 songs, two together and one by itself further along in the program: “Jingle Bells,” “Joy to the World” (The Preacher’s Wife style), and “Emmanuel Come (O Come, O Come, Emmanuel),” which was a modern re-work of the traditional version. The first week was really hairy for me because I was going to do this without help of a confidence monitor (and it’d been a while since I’d had to remember the lyrics of that many pieces without any kind of help). I was also nervous about how this would go, being my first experience singing in Zako. But I had nothing to worry about; it went awesome! So many people thanked me and I made some new contacts for other singing opportunities in Katowice. God’s got some plan working here and I’m excited for it. 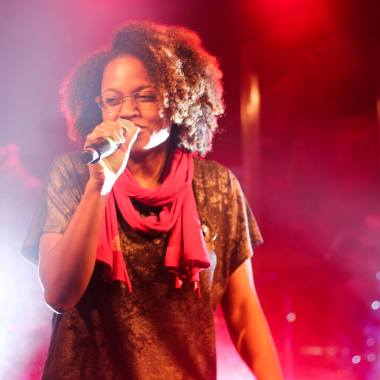 Something different culturally that I noticed was the way the crowd would react. They may really enjoy the performance they’re watching, one or two people you’ll see clap along or sway to the rhythm, but the overall feel is stiff. I’d encourage people to clap and they’d hold it for as long as I did and drop as soon as I couldn’t clap anymore because I started singing. Even toward the end of “Joy to the World,” when I’m really going in, they just watch. One of the leaders of the gospel choir (I’d met him a previous summer at Fishart camp in Zakosciele) was explaining why and I think it makes sense. Some of it relates to the conservative Catholic background and the other is that for so long people were repressed, told to keep their head down and be unnoticed. Things are slowly changing, but it’s still difficult for people to feel free expression. After telling me this, he looks at me and smiles, “But we’re here to really change that and bring the truth, sister.”

I was really encouraged (and exhausted) through the whole thing. It was wonderful to serve and use my talent in this capacity, and I’m certain of more opportunities to come in 2018.

This site uses Akismet to reduce spam. Learn how your comment data is processed.