Yeah, the title is a little cheesy, but it suits the story I’m about to share.

So, last month was pretty rough for me. My mom sent a message on June 5th that my grandma had passed away. It was a lot sooner than everyone expected (although, these things tend to happen suddenly). I was bounced back and forth between my ticket agent and the airline that whole week in vain. I stopped trying eventually out of frustration because nothing was making a difference, and I was going to miss my grandma’s funeral. She and my mom had told me earlier that they understood if I wasn’t able to go, but it was still hard for me to accept that. Then, I broke up with my boyfriend at the end of the same week. I had been dating my close friend for 4 months when a situation made it clear that things were not working. It didn’t end the way I had imagined and it just capped off the terrible week I was having.

As you can imagine, by that next week, I was so emotionally and physically done. I’d slept poorly for the last 3-4 days, and I prayed a lot. That Tuesday, I had made a video with remarks about my grandma to send for her service. And the rest of that day had felt really heavy. I didn’t sleep well. I ended up dozing off and on, eventually feeling like I needed to pray. It was exactly during this prayer — where I started to really surrender my brokenness and accept His peace — where I heard this sound. It was about 4 AM and the sun was already up. I figured it was a bird at first because the magpies sometimes make a crying noise. But it came again and I could tell it was inside the building, and that it was definitely a cat.

I went out and up the stairs to the attic/storage space, and in the dark, I saw this little white creature scurry across the floor to duck behind some suitcases and boxes. I recalled hearing a crying sound like this the morning before, but I had been half asleep then and more distracted. And my roommate had said something ran across the floor when she went up there later that day. The distress in his cry told me he must be pretty hungry. 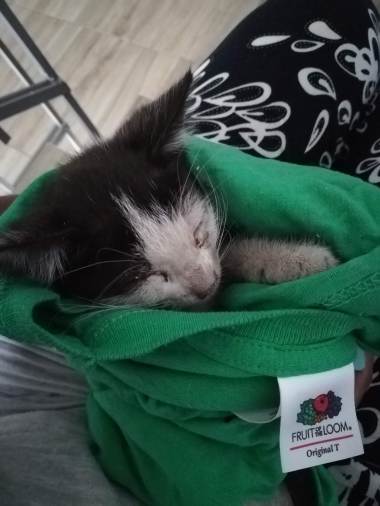 So I hurried downstairs to scrap together whatever I could find. I had a can of tuna and some bottled water, so I grabbed a food container and went back up to the attic. He cried very loudly and had come all the way outside the door to watch if I’d come back. As soon as I approached him, though, he ran right back into the bags and boxes, afraid. I tried coaxing him out with a piece of tuna, but he was too scared. Leaving had worked once, so I pretended to go away and hid behind the door to the attic. He cried, walked out, noticed me right away and the minute I took a step, he ran back inside quickly. We went at this for about 15-20 minutes before I finally cornered him in a dirty, cob-webbed corner of the attic and wrapped him up in a worn t-shirt.

He didn’t cry after that much. There was a little bit of struggle, but wrapped up snug and gently pet on the head, he calmed down right away and started to doze.

Now, besides being a sweet story about how I found my cat, there’s some symbolism behind it. I grew up with cats and have a deep fondness for them. In fact, my love language from God is whenever I see a cat or have a chance to encounter one, it’s like God reminding me how much He loves me and is thinking of me in that moment. After all the hurt and stress I’d gone through the last week, for me to encounter this random animal in my attic, seemingly out of nowhere, was kind of an ‘a-ha’ moment for me.

Most of that morning, I looked after him. He had some tuna after a while and napped a little bit. He looked pretty healthy: no mites or fleas from what I could tell. And he was pretty young. A friend of mine said about 5-7 weeks.

At first, I went about trying to find him a new home, but no one I asked wanted to keep him or couldn’t. There aren’t any cat shelters in Tomaszów, or really much of anywhere in Poland, and I was leaving for the States in a few more days. I thought to just let him go outside again where he probably came from, but he flipped out and scrambled around the parking lot at my apartment building, running under the parked cars and looking terrified. I caught him up again and he immediately calmed down. “Well,” I thought, “I have a cat now.”

But still, I had a problem of where to keep him while I was in the US. He was too young to fly and would need to get his vaccinations in order first anyway. God totally provided. A friend’s family said they could help me by keeping him while I was away and that settled my decision. And so, I named him Miłosz  because he’s a symbol of God’s love and thoughtfulness of me and also because he’s really quite a sweet, loving cat.

Currently, he’s doing quite well and making some new friends where he’s staying. I promise he does more than sleep, but I do think that’s his favorite activity. 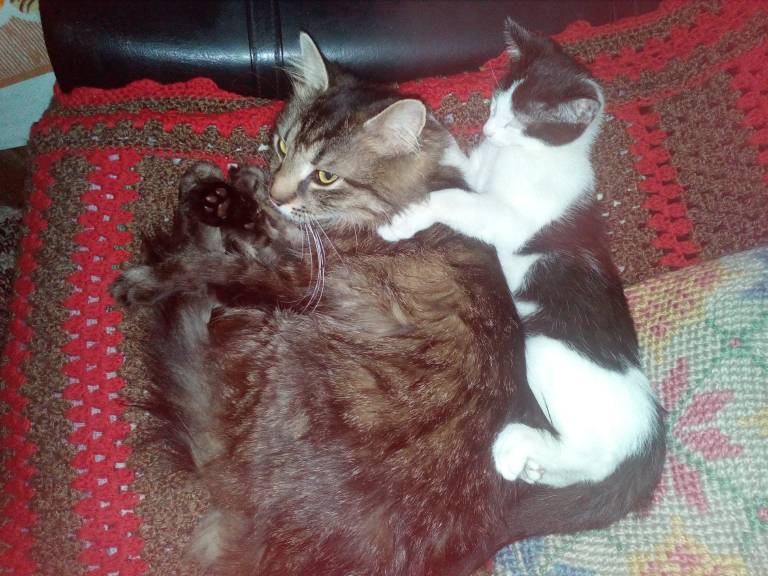 One thought on “Hugs from Heaven”

This site uses Akismet to reduce spam. Learn how your comment data is processed.